If You’re Bored, You’re Not Growing 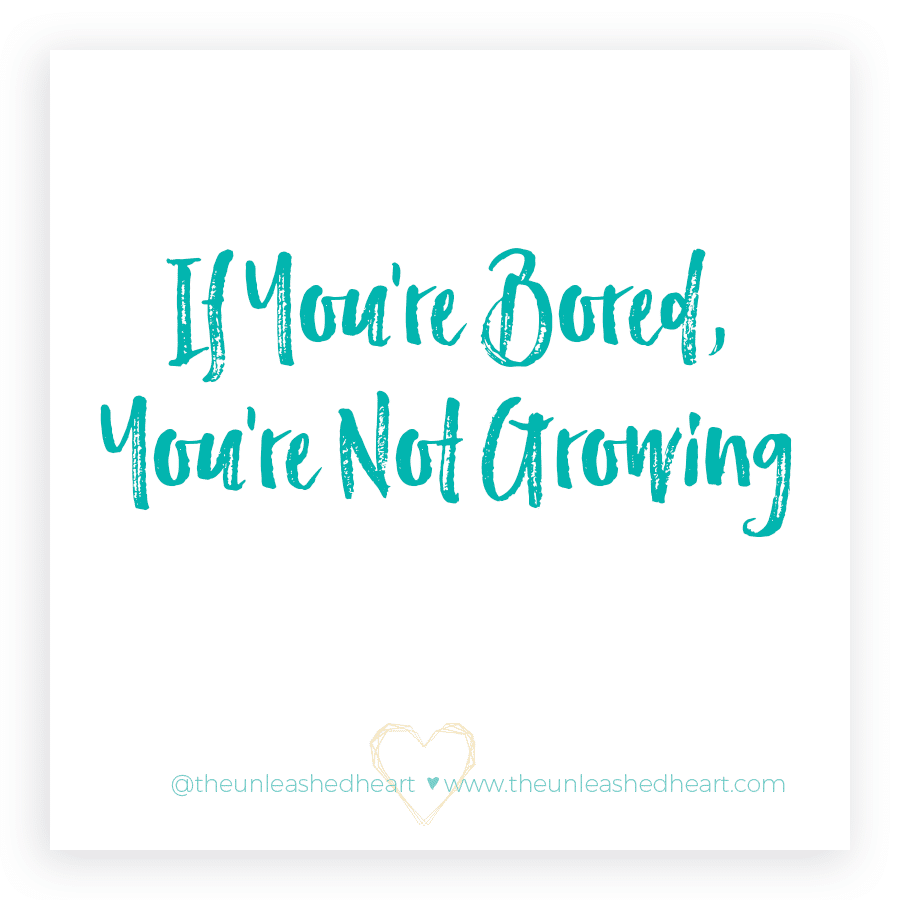 This week’s newsletter I sent out on Wednesday was about boredom. I thought I would go a bit more into depth on the topic here on the blog.

The one phrase you will never hear me say is…”I’m bored.”

I don’t know what boredom is. Even as a kid, I always found something to do. On the flip-side of not having anything to do, I don’t feel bored when I find myself just “BE-ING.”

When was the last time you allowed yourself to BE?

My response to my kids when they say they’re bored is the same every single time: “Don’t tell me you’re bored because I’ll find something for you to do!” There’s always something that can be cleaned, organized, or whatnot when you have a home.

How often do you think about there being nothing to do and feel bored?

Here are some questions to ask yourself when you feel bored:

If you consider all of the possibilities and opportunities that await you daily, boredom wouldn’t even enter your mind.

Rather than mindlessly watching tv out of boredom, or scrolling all of the Facebook drama (which neither of these serves your highest good), look within to see what it is you wish to discover or learn about yourself or begin the practice of just BE-ING still with yourself. One of my favorite things to do during the warmer months is sitting outside early in the morning and listening to the birds serenade me. I feel such peace. And nowadays, who couldn’t use more of that?

In this article by the American Psychological Association, it says:

There’s even evidence that the phrase “bored to death” has some truth to it. As part of the Whitehall II Study, begun in 1985, British civil servants answered questions about social determinants of health, including some questions about boredom. More than two decades later, Annie Britton, PhD, and Martin Shipley, PhD, compared their responses with death records. They found the people who reported experiencing a great deal of boredom were more likely to die young than those who were more engaged with the world (International Journal of Epidemiology, 2010). The researchers theorize that boredom was probably a proxy for other risk factors, such as drug and alcohol use. Boredom is also associated with performance detriments, which in some cases can lead to serious problems.

“We know when people are bored they’re more likely to make performance errors and likely to not be as productive,” says Eastwood. “That’s a big deal if you’re an air-traffic controller or you’re monitoring a nuclear plant.”

On the other hand, boredom can prompt people to move out of tedious routines. Belton recently interviewed people known for their creative success, including an artist, a novelist, a poet and a neuroscientist. “They all said boredom can instigate new thinking and prod them into trying new things,” she says.

The poet took up his craft in middle age after finding himself stuck in a hospital bed for several hours with nothing to do. The only paper he had available was a stack of Post-It Notes, so he began writing poetry, the most practical activity to fit on three square inches.

“If people don’t have the inner resources to deal with boredom constructively, they might do something destructive to fill the void,” Belton says. “Those who have the patience to stay with that feeling, and the imagination and confidence to try out new ideas, are likely to make something creative out of it.”

The last paragraph above, from that blog post, is the premise of this blog post today. Use boredom to your advantage; take the time to BE, or use it as fuel to follow your curiosity in life. And, ask yourself if you are feeling bored if you’re looking for or needing something to fill a void you’re feeling in your life.

I have days where I binge-watch a show. Particularly on days when I’ve had a week where my mental bandwidth was pushed to the max and needed to let my mind go, meditation is great for this, too, of course, but I do get where sometimes you need just to let your mind go and prefer to do so in an entertaining way. However, if we ask ourselves if I’m bored because I’m avoiding a greater issue at play internally or am seeking out an outside fix to fill that internal void – that’s where we are given an opportunity.

The opportunity is what this post is about, too. We are given opportunities to grow daily, because, if we’re in relationships with people, there’s always something to learn. Our relationships, and the substance of those relationships, are a mirror and reflect us where we’re living in our authenticity or where we’re operating out of a place of fear.

So, the next time you’re bored – perhaps, it is just that. But, I challenge you to think outside of the state of being bored and into a state of a more effective and self-serving way to use your time. What is something you’d like to learn about yourself? What do your dreams mean? What location sounds interesting to explore? Where are there opportunities to grow – physically, spiritually, emotionally, and mentally?

The best question to ask ourselves is how we waste our own time – which is the most precious commodity we all have. And, for being a society which relishes on the idea of never having enough of it, there shouldn’t be anyone saying they’re bored. And, on the flip-side, perhaps people aren’t allowing themselves to get to that state in the first place? Where they ask themselves the very questions, I posed in this blog post. Hmmm…getting deep…

I would be remiss if I didn’t weave this somehow into grief. Those who do not have the luxury of being bored because they are a caregiver to someone ill (physically or mentally) or dying are thrown into growth territory they didn’t ask for whether they like it or not. Experiences like these leave imprints on our hearts and sometimes, not the best of ones. So, for those of you who are a caregiver, I’m not going to sit here and tell you to find time to get bored. Rather, maybe the best thing you can do for yourself is to create some space in your day to reflect. Celebrate where you showed compassion, empathy, and care so selflessly. Acknowledge the fact that you are being an expression of love to someone else. And, for those of us who are not in the position of caring for someone ill/dying, may we consider that boredom is a luxury and it’s time to utilize our time for good – of improving ourselves or the lives of others.

What say you? Do you find yourself frequently bored? Or, do you wish you actually had the “luxury” of being bored?

I guess how you answer is a reflection of how you view time itself. And, the impact you wish to leave on the world.

Join The Unleashed Letters and receive weekly inspiration + exclusive content not shared anywhere else. You'll also be the first-to-know of upcoming dates/times of Grief Recovery Programs and informational talks.

You have Successfully Subscribed!

Discover more about yourself & your hurting heart.

Each Wednesday, you'll receive insight and nudges for personal growth to support you in healing from all kinds of grief.

You're in! Thank you so much for subscribing!

Share This
We use cookies to ensure that we give you the best experience on our website. If you continue to use this site we will assume that you are happy with it.Ok